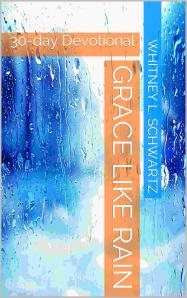 Buy Grace Like Rain from Amazon now for only $3.99

(Last chapter from the Kindle devotional ebook Grace Like Rain.”

Grace.  It’s a word often used in the realm of Christianity, but do we really understand what it means?  Do we realize the depth of it?

Grace is God’s infinite love, comfort, and forgiveness of His children.  Grace is the blood flowing down from the pierced body on the cross and washing away our sins, cleansing us in its purity.  Grace is God’s gift offered freely to all mankind—infinite, unimaginable, amazing.

“For the grace of God has appeared, bringing salvation to all men,” Titus 2:11

Notice it says, “all men”.  Jesus’ sacrificial death on the cross made salvation available to all men.  No matter who you are, where you are, or what you’ve done, salvation was made available to you through the death of Christ.  All a person has to do to receive salvation is to repent, believe, and follow God.  Then no matter what sins are written on your slate, grace will wipe it clean.  Even if you’re a Christian who’s lost their way, grace can still wash you clean.

The Bible itself contains some of the best examples of grace.

Paul persecuted Christians, dragged them off to prison, he was a bad word in the mouths of believers, but by the grace of God, he was saved and became one of the greatest evangelists of all time.

Moses murdered a man, but later he led the Israelites to freedom and received the Ten Commandments from the Lord on Mount Sinai, becoming one of the greatest figures in Christianity.

David had an affair with a married woman and caused the death of her husband, but by the grace of God, he was forgiven and remains to this day one of the great heroes of the Bible.

“But what do I have to do to get grace?  Drop a few dollars in the offering plate?  Do penance?  Volunteer at a soup kitchen?”  No, no, and no.

“for by grace you have been saved through faith, and that not of yourselves; it is the gift of God, not of works, that no one would boast.” Ephesians 2:8-9

Grace is a gift from God achieved through the death of Christ on the cross and received by you through faith.  No strings attached.  All that is required of you is that you have faith and follow God.  Good deeds don’t get you to heaven; only God’s grace received by faith can do that.  However, that doesn’t mean that you should just float through life never doing good things or acting on your faith.

“For as the body apart from the spirit is dead, even so faith apart from works is dead.” James 2:26

“‘What good is it, my brothers, if a man says he has faith, but has no works? Can faith save him?  And if a brother or sister is naked and in lack of daily food,  and one of you tells them, “Go in peace, be warmed and filled”; and yet you didn’t give them the things the body needs, what good is it?  Even so faith, if it has no works, is dead in itself.  Yes, a man will say, “You have faith, and I have works.” Show me your faith without works, and I by my works will show you my faith.” James 2:14-18

How Sweet the Sound

When we have been saved by grace and live by faith, our slate has been washed clean and we need not be burdened by the weight of past sin and guilt nor do we need to allow others to make us feel that way because of those things.

“But God, being rich in mercy, for his great love with which he loved us,  even when we were dead through our trespasses, made us alive together with Christ (by grace you have been saved),  and raised us up with him, and made us to sit with him in the heavenly places in Christ Jesus,” Ephesians 2:4-6

God’s grace is sweet and amazing just like the old song says.

Dear Lord, when we fail, remind us of Your grace,

Help us live our faith and remain

In the shining light of Your beautiful face,

And pour down on us Your amazing grace like rain.

“There is therefore now no condemnation to those who are in Christ Jesus,” Romans 8:1

“For sin will not have dominion over you. For you are not under law, but under grace.” Romans 6:14