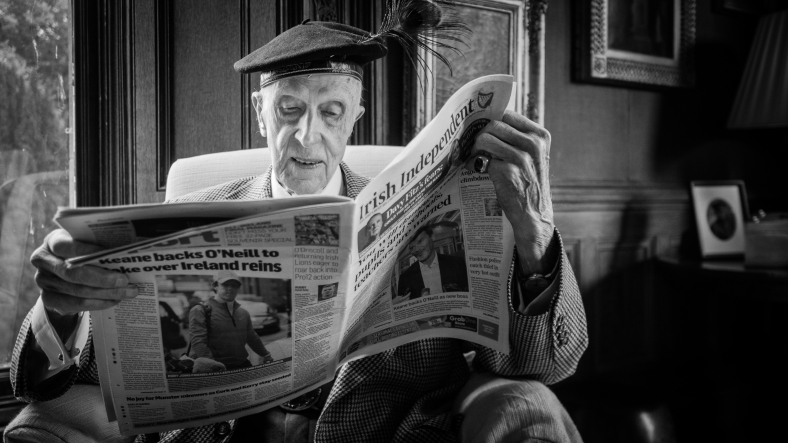 Photo “Irish Independent” taken 9/27/13 by Thomas Leuthard. Made available at Flickr.com under an Attribution 2.0 Generic license.

Mrs. O’Toole set the newspaper down on the table beside his steaming mug of coffee and Doran glanced at the headlines. Something about three women from Riverside being murdered and Eisenhower endorsing Nixon. He turned away from the paper with a sigh.

He’d made the vow at his retirement party. He wouldn’t follow the crime reports. There could be all manner of crime throughout the city, but he absolutely would not care.

He’d been on the force for over fifty years—started as a flatfoot walking the beat on Michigan Avenue and worked his way up to chief of police. But times were changing and so was the department. Now that Mayor Daley had appointed Wilson as the new PC, the progression was moving forward at full-steam. Doran knew it was time to step down, but he’d still lingered in the doorway, taking one last glance around his office on the second floor. The leather chair sat behind the desk, a tear on the right arm and a patch on the seat to keep the stuffing in. The mahogany desk, which in its glory days wore a fresh coat of lacquer and a mess of paperwork, now stood empty, the top dull and scratched.

A sigh escaped Doran’s lips now at the memory. The office reminded him of himself—once young and useful, strong and full of vigor, now old and worn. Doran had been a cop’s cop in his day, hard-as-nails and sharp as a tack. The one everyone went to for solutions. Now he was about as useless as an old hunting dog left to stay warm on the hearth rug and pick up crumbs from the table.

A knock sounded at the door. Mrs. O’Toole went to answer it and Doran proceeded to eat his scrambled eggs.

He glanced up when a man entered—a young detective named Gordon.

“Chief, I…I was hoping you could help me with something.”

Perhaps he wasn’t quite done playing the game yet.

As a matter of fact, private investigator had always held a nice ring to it.